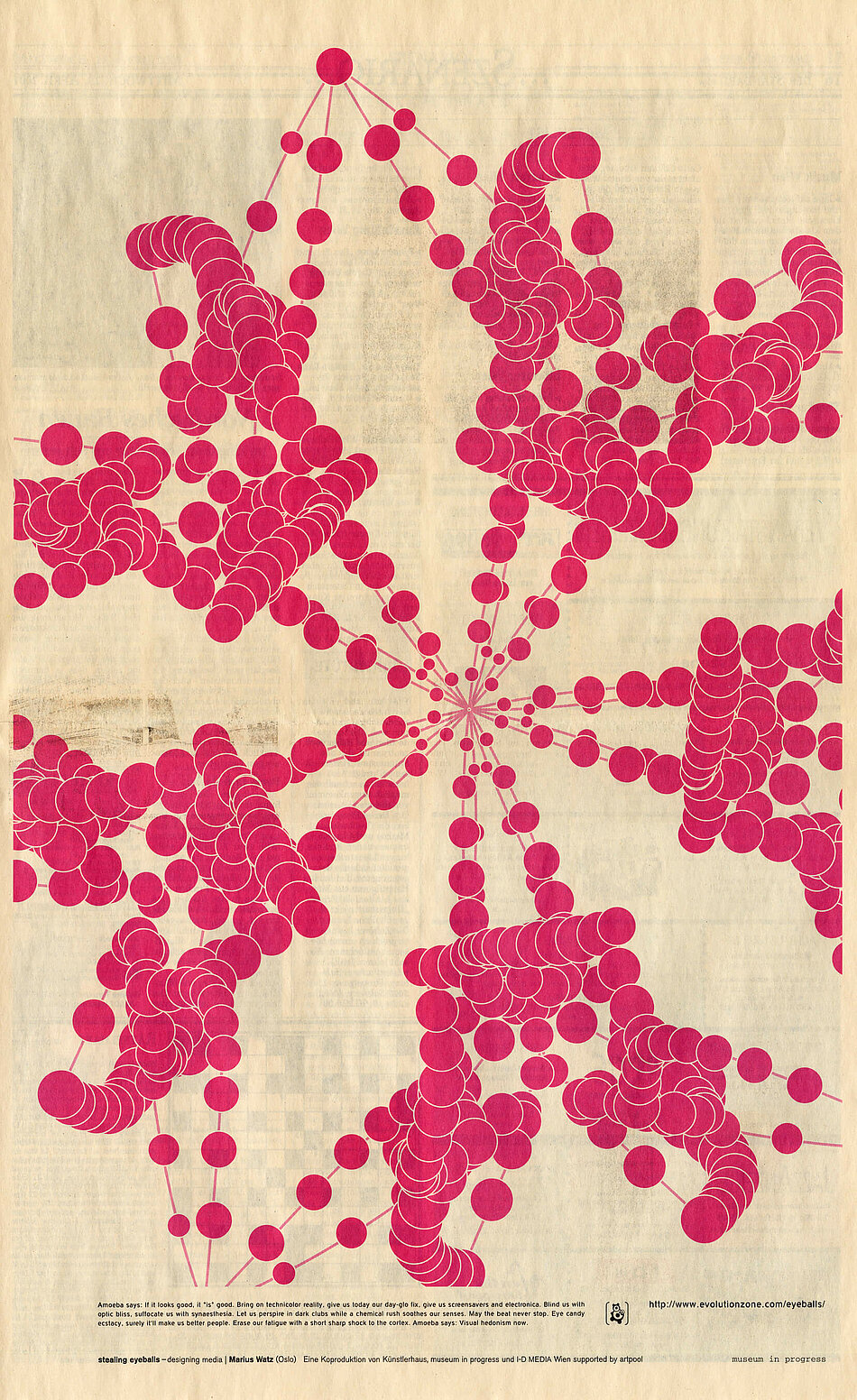 "If it's fast, brightly coloured and noisy I'll probably like it" – this is the credo of multimedia-designer Marius Watz. And a visit to the website evolutionzone.com, with its' seemingly uncontrolled growth of snappy, colourful techno-organisms, proves how radically he translates his motto into visuals. The Norwegian focuses on algorithmically calculated graphics and animations in 2D and 3D, evoking the appearance of organic and mechanical influences. For this purpose, he utilizes all media which operate with digital input: newspapers, CD-ROMs, websites and TV. His greatest idols, he claims in an interview with stealing eyeballs, are therefore Renaissance designers "who embrace all media".

Watz was socialized in the hedonistic techno-scene of the early '90s, incorporating the "more is more" philosophy of the time. Today his style is influenced mainly by British graphic design as well as references to Japanese pop-culture. In his "day-job", Marius Watz collaborates with Johan Worsoe Eriksen as an all-rounder of the Design Studio Play www.playpuppy.com. Play seeks the ideal solution for clients, ranging from radical artistic projects for the creative arena to the straightforward Norwegian online telephone book. However, the cross-media-designer places at least the same emphasis on his non-commercial activities. Under the pseudonym "amoeba", Watz functions as an active link within the heterogeneous community of web-designers with sub-cultural aspirations by communicating new developments from the scene on his site evolutionzone.com. Play also frequently instigates parties, exhibitions and readings, publishes its' own magazine and generally does "whatever seems like fun". Games, Watz states in the interview, are simply vital for the image.

The twenty-seven-year-old also regards the community-aspect as an online essential. He still believes in the "old-fashioned idea of a net.community", opposing the hot air of the dot.coms. In the early '90s, he actively participated in the "Future Culture" mailing-list, in which the commercialization of the Internet was debated several years before the WWW came into existence. Even then he adamantly contested this commercialization, and today feels justified in having done so, says Watz. Evidently, in spite of the hype and the resulting dot.com deaths, an active community of civil society survives on the net. As long as standards such as html remained accessible to all, and most dot.coms replaced each other in a two-year cycle, the world was in good shape. So no stress, opines Watz, "You can't beat Microsoft at their own game, so avoid MSN like the plague!" Nonetheless, "Newbies" still aggravate him because they never experienced the Internet as a communicative medium: "I get angry when I meet new media yuppies who have no understanding of the net as a medium for social interaction, and who only think of people in terms of dollars-per-click."