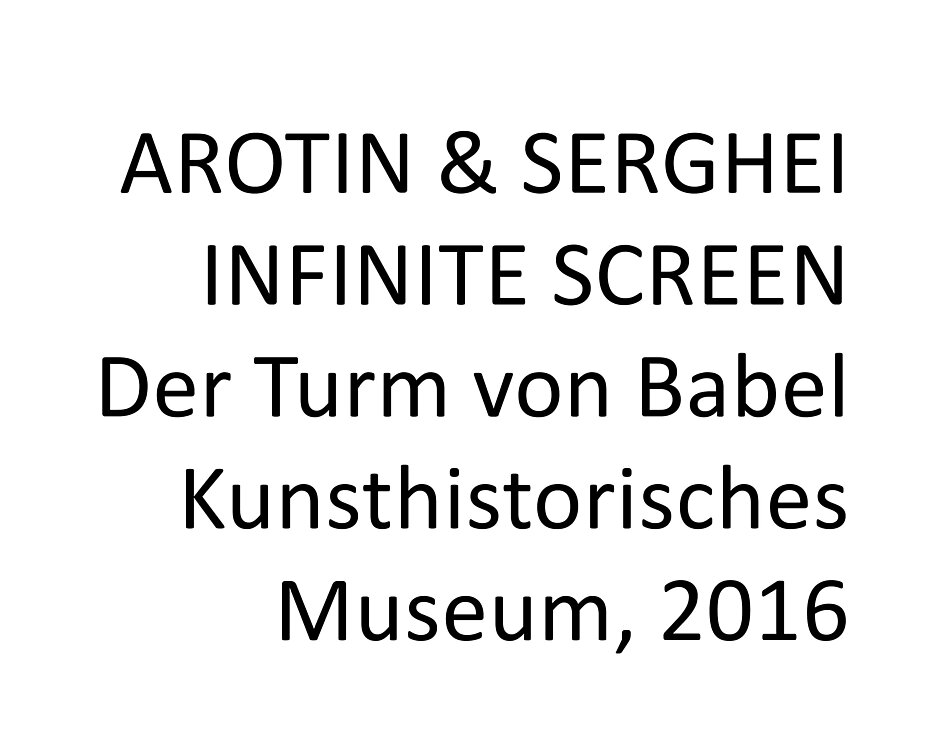 The installation "INFINITE SCREEN – The Babel Tower" by AROTIN & SERGHEI was presented from 22 September until 19 October 2016 daily from dusk until midnight as a large-scale video projection (1200 sq m) on the main façade of the Kunsthistorisches Museum Vienna to mark the 125th anniversary of the museum. Hereby one of its most famous pictures, "The Tower of Babel" by Pieter Brueghel the Elder, was transformed into a rotating structure of light cells in continuous mutation with emerging details from masterpieces of the KHM collection.

AROTIN & SERGHEI composed a sound installation to accompany the endless circular movement. It contains various sounds and electronically manipulated themes from Bach, Wagner and Schubert’s later works and "Unfinished Symphony", played on the piano by the famous pianist Mikhail Rudy and by Alexander Arotin. Furthermore the artists included text fragments from Homer, Dante, Karl Kraus, Beckett and Wittgenstein, from the Mahabharata and from navigation systems. The circular dynamic as a defining element in Vienna, from waltzes and the Giant Ferris Wheel to the Ringstrasse, forms a basic structure for the endless movement of image and sound in the "INFINITE SCREEN – The Babel Tower". The project was initiated by museum in progress under the direction of the curator Kaspar Mühlemann Hartl.

Corresponding to the installation at the Kunsthistorisches Museum the exhibition "LIGHT CELLS – intermedial painting" was shown at the auction house Artcurial (Rudolfsplatz 3, 1010 Vienna) from 22 September until 25 October 2016. In it AROTIN & SERGHEI presented art works which are related to the installation at KHM.

The installation "INFINITE SCREEN" by AROTIN & SERGHEI is a work in progress, which has been realized in several forms, each in a different context. The first part of Infinite Screen was shown in the Great Hall of the Vienna Konzerthaus in 2013 in cooperation with museum in progress and Klangforum Wien. For the premiere of Aureliano Cattaneo's Parole di settembre I–III the artists designed a projection shown on a 12 x 12 metre screen. Animated in real time to accompany the music, the installation looked at perspective and the illusionary painting of the early Italian Renaissance and at Andrea Mantegna in particular, to whom the evening was dedicated. His study of perspective was shown in the projection in the form of assembled pictorial allusions. At the same time, the installation reacted sensitively to the music. Following its great success, the project was invited in 2015 to the Art Biennale in Venice, where it was presented again to open the music programme. In 2014 the artists showed the second part of Infinite Screen at the Ars Electronica in the Brucknerhaus Linz, this time in connection with Wittgenstein's philosophy and theory of perception. The following year and in 2016 the artists again performed at the Ars Electronica, this time experimenting with extremely high-resolution images in the Deep Space exhibition room, which is equipped with high-performance projectors, resulting in the breath-taking perfection of the technological art project White Point.