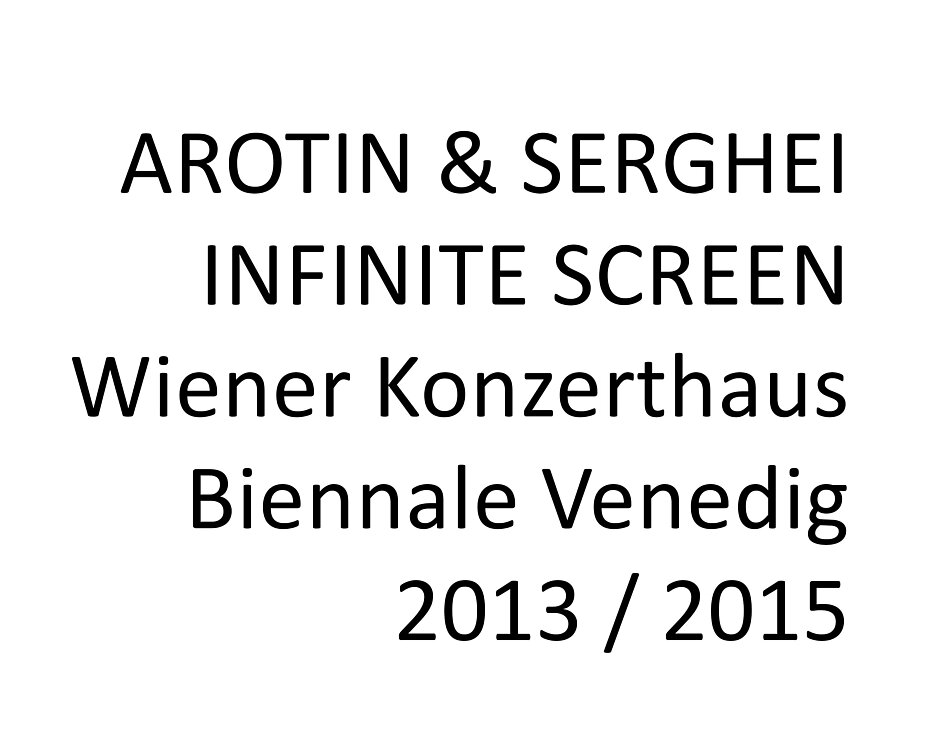 Unlike usual computer screens, in which pixels are always arranged in such a way as to realize the best possible image display and readability, INFINITE SCREEN works with the surface of illusion itself and with the hidden "alphabet" of red, blue and green light cells which, by means of their infinite gradations of intensity, are capable of representing all possible signs, images and texts. In reality, these particles are so small that they are not individually distinguishable by the human eye. In the artistic work of AROTIN & SERGHEI these nano-components become large scale light-cell images that create new visual space.

The installation INFINITE SCREEN will be realized in several forms, each in a different context. The first part was shown in the Vienna Konzerthaus in collaboration with Klangforum Wien as a square 12 x 12 metre projection. 2015 the installation was presented as a cross-disciplinary project at the opening of the Venice Biennale's official music program at Teatro alle Tese in Arsenale.

INFINITE SCREEN I was dedicated to the Italian early Renaissance painter Andrea Mantegna (1431–1506), who consistently applied Leon Battista Alberti’s laws of perspective (1453) on drawings of human body, enabling new extensions of space in visual art. Simultaniously, the world premiere of "Parole di settembre I-III" – a musical composition by Aureliano Cattaneo, was performed by the Klagforum Wien orchestra. This composition was inspired by the dadaistic contemplations of the Italian neoavantguarde poet Edoardo Sanguineti (1930–2010) about pictural elements in Mantegnas Oeuvre.

The installation was electronically animated by AROTIN & SERGHEI. The visual development references both a stylized - digitized view of the sky through the square frame in the circular courtyard of Mantegna's house in Mantua, as well as the framework of Sanguineti's picture book of infinite possible image combinations, published as "biggest art book in the world" by 1966 Mazotta, Milan, that plays in an ironic way with image citations and anticipate the digital context of future.

"In their work, AROTIN & SERGHEI bring the fundamental humanistic idea of the Renaissance, the expansion of space and thought, into our time. Abstract shapes and pictorial quotations by Mantegna are projected in a perspective structure onto the wall. The vanishing point becomes a place at which the screen opens up. The wall crumbles through the illusion of infinity. The round inner courtyard in the residence of Mantegna, one of the most important Renaissance figures, becomes a synonym for a place of remembrance: a square surrounded by a circle from which all pictorial worlds emerge and transform themselves."
(Ivan Fedele, transcription of a speech on 2 October 2015 at the opening of the 59th Festival for Contemporary Music at the Biennale in Venice)

On 8 November 2013 AROTIN & SERGHEI opened the exhibition "FREE CELLS" in "Bildraum" (Burggasse 7–9), which is thematically connected to INFINITE SCREEN. And at a later date the installation will be continued as work in progress in an urban public space.