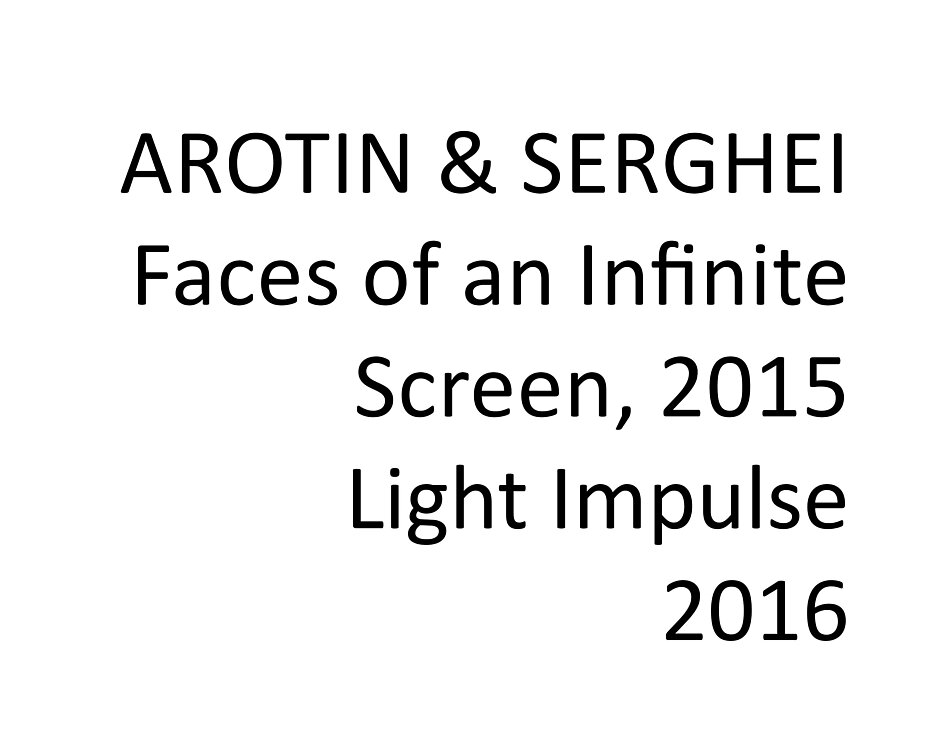 From 7 to 20 April 2016the exhibition "Light Impulse", curated by Kaspar Mühlemann Hartl, was being shown at Espace Muraille in Geneva and included the long term project "Infinite Screen".


The installation "Faces of an Infinite Screen – My West Is Your East" is a homage to "My East Is Your West", an official collateral event of the 56° Venice Biennale that hosts works by Shilpa Gupta, India, and Rashid Rana, Pakistan. The installation by AROTIN & SERGHEI shows aspects and "faces" of Infinite Screen I, shown at the Musica/Venice Biennale with Klangforum Vienna, on 2 October 2015, and a preview of Infinite Screen part 3, in preparation for the Kunsthistorisches Museum 2016 Jubilee Celebrations in Vienna.

Inspired by Ludwig Wittgenstein's statement "Everything we see could also be otherwise", the installation shows the hidden side of visibility, focusing on the illusionary surface of images. The hidden "alphabet" of red, blue and green light cells, by means of their infinite gradations of intensity, are capable of representing all possible signs, images and texts (they make up all surrounding digital information). In reality, these particles are so small that they are not individually distinguishable by the human eye. In the artistic work of AROTIN & SERGHEI these nano-components become large scale light-cells images that create new visual space.

The installation will be animated live by the artistic duo during the vernissage at Palazzo Benzon on September the 30th 2015 and accompanied by a sound installation composed for the occasion.

Through a cross disciplinary approach, that involves geometry, architecture, music and philosophy, AROTIN & SERGHEI combine in our context images from East and West in a circular space that questions the idea of point of view and center. Transgression of space and time, location and dislocation: these premises will allow visitors to find analogies and affinities between the cultural issues of My East Is Your West and this homage that counts on Italian, Austrian, German, Russian and French collaborations: .you think you go forward, towards East or towards West, but you come up to the same point, again and again… (A & S).