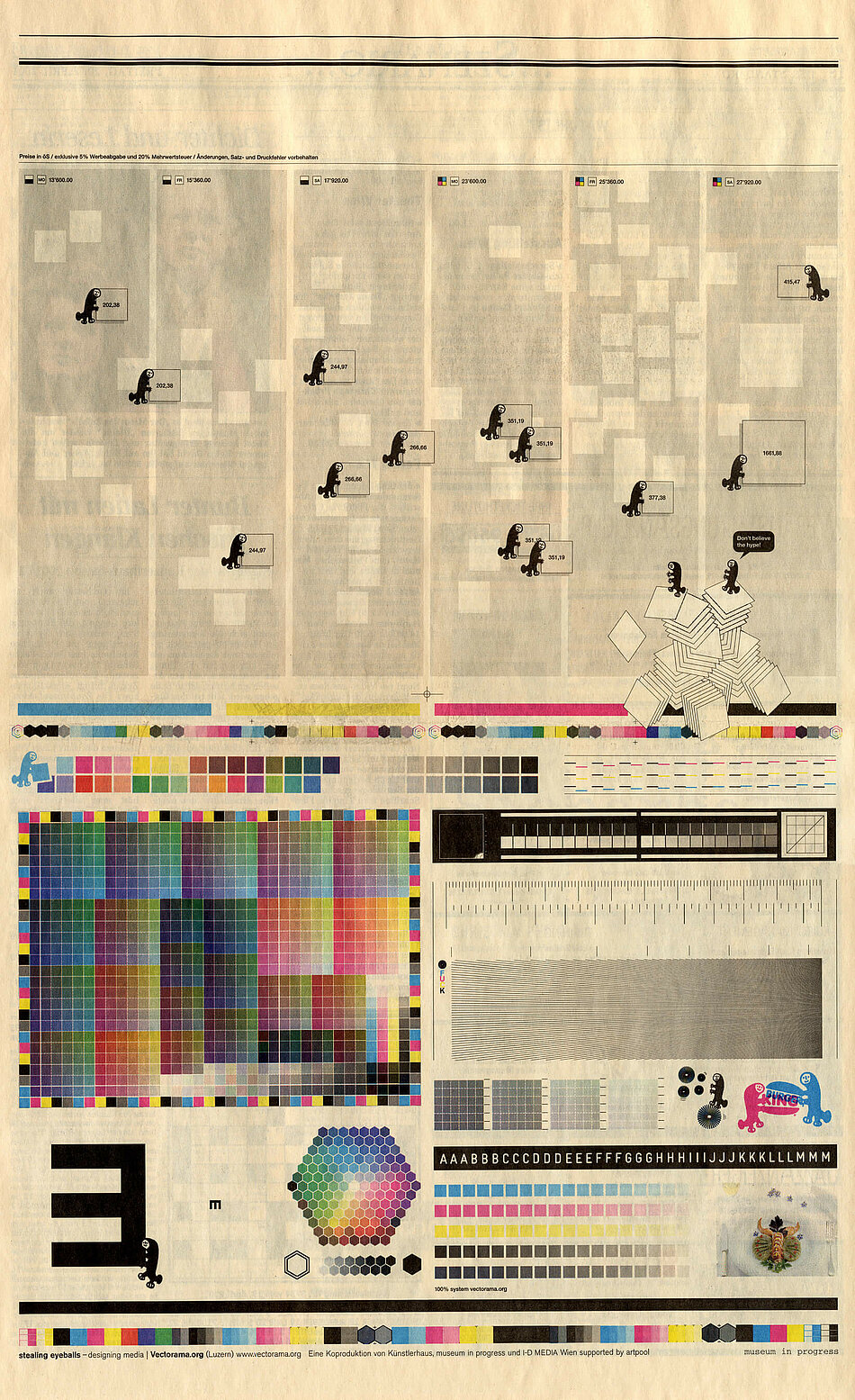 These days, Vectorama.org is one of the most talked about sites on the WWW. Created by three young web-designers – Rafael Koch, Urs and Jürg Lehni – this site allows users to collaborate on an image using innovative tools. Their previous projects, "Lego Font Creator" and "Rubik Maker", won great acclaim in the web-design scene. However, Vectorama.org was a break-through for the three Swiss men, since the end of 1999 it's taken them from festival to festival.

Unlike similar multi-user-graphic programs, such as Microsofts communication program "Netmeeting", Vectorama offers users finished objects. With "drag and drop", comics, ad-graphics and images inspired by American pop-culture can be placed on the so-called playground. Then they can be modified in size, colour and position. Now users can work on the playground with a drawing utensil and text-tool. The objects on the drawing-board can be altered or deleted by the users, all of whom can observe the changed images on the monitors in real-time. The playground can be printed out or emailed to a third party at any time. Furthermore, users have the possibility of communicating with each other via text-chat.

Urs Lehni on the vision behind Vectorama.org: "The fact that someone in Switzerland can 'touch' and work on a Vectorama-object simultaneously with someone in Tokyo, and that these modifications are displayed in real-time, holds great meaning for us. The new possibility of cooperating regardless of geography, which multi-user-applications such as this offer, illustrates for us the future of the Web." Cooperation, communication and creativity are the main focus of Vectorama, even if the images often appear chaotic as soon as more than two users are at work. But that is exactly what makes Vectorama so interesting, it mirrors the soul of the Net. The decisive factor here is the users' ability to communicate. If a destructive user deletes or paints over an entire image, it's simply gone. If a group of users utilizes the tools' possibilities beneficially in a process of mutual collaboration, then from time to time great art is born.

The Vectorama.org image does not merely possess a status quo, but also a history, which can be saved in the "History" area and downloaded by anyone. The server registers the pictures' condition every five minutes, over 18.000 images have been created since the beginning of Vectorama.org in September 2000. Every single image can be called up by date or by navigating a time-vector, it can be reconstructed and sent on demand. Besides the graphic-module, Vectorama.org is also a homepage full of humour and "attitude", portraying its' webmasters to be young, stoned techno-freaks. The three young Swiss stars don not take the current hype about them is not taken seriously, as their web-log proves. In their opinion, the coolest part of the New Talent Competition Awards, at the Milia 2001 in Cannes, was the VIP Lounge – offering free drinks – and the parties, to which they were invited daily by "companies no one's ever heard of".