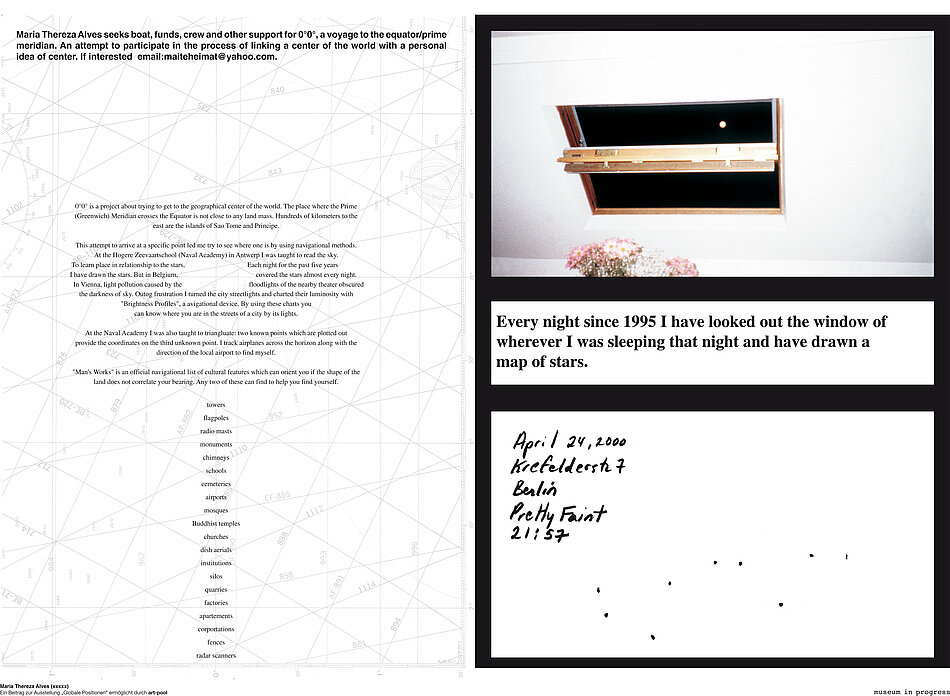 Maria Thereza Alves seeks boat, funds, crew and other support for 0°0°, a voyage to the equator/prime meridian. An attempt to participate in the process of linking a centre of the world with a personal of centre. If interested email: maiteheimat@yahoo.com.

0°0° is a project about trying to get to the geographical centre of the world. The place where the Prime (Greenwich) Meridian crosses the Equator is not close to any land mass. Hundreds of kilometres to the east are the islands of São Tomé and Principe.

This attempt to arrive at a specific point led me try to see where one is by using navigational methods. At the Hogere Zeevaartschool (Naval Academy) in Antwerp I was taught to read the sky. To learn place in relationship to the stars. Each night for the past five years I have drawn the stars. But in Belgium, clouds covered the stars almost every night. In Vienna, light pollution caused by the floodlights of the nearby theatre obscured the darkness of sky. Out of frustration I turned the city streetlights and charted their luminosity with "Brightness Profiles", a navigational device. By using these charts you can know where you are in the streets of a city by its lights.

At the Naval Academy I was also taught to triangulate: two known points which are plotted out provide the coordinates on the third unknown point. I track airplanes across the horizon along with the direction of the local airport to find myself.

"Man's Works" is an official navigational list of cultural features which can orient you if the shape of the land does not correlate your bearing. Any two of these can find to help you find yourself.